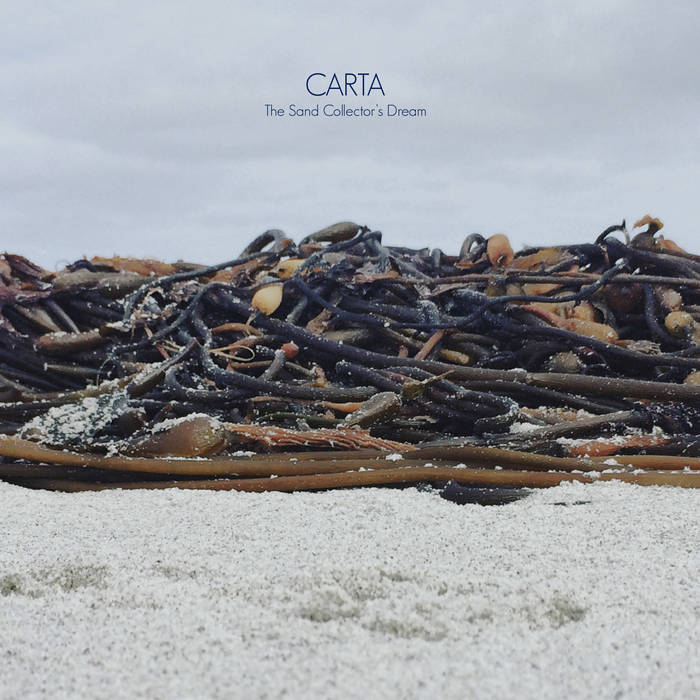 Saint Marie Records is honored to release the fourth album from SF Bay Area collective Carta. The evocative titled The Sand Collector’s Dream is everything music should be in 2017—completely original and soaked in a despair that is both absolute and yet somehow uplifting. The Sand Collector’s Dream is the medicine you didn’t even know you needed. If only there were a way it could cure the sickness of this society and the demons that threaten to subsume us.

The Sand Collector’s Dream defies genre; it can only be talked about in terms of emotion.An album of vast stylistic breadth, the band’s description of their sound as ‘paranoid inner-vacuum micro-dub and ruminative post-space hypno-drone’ still doesn’t convey it.

Just say it’s the missing link between Another Green World and Young Marble Giants. Songs of water & ghosts, what the band so eloquently refers to as ‘the eternal internal struggle,.’ they trace a journey from entanglement to solitude, from optimism to defeat. It’s that feeling when your mind is clear but everything around you is fog.

Carta functions as a collective, trading off instruments, and even trading off vocals. Bassist Sacha Galvagna does most of the heavy lifting, but Kyle Monday and Jon DeRosa take lead on a couple of songs. Yet it’s the vocals of Odessa Chen, blending with the men in a series of duets, that steals the show. Their voices blend together like a Lee Hazlewood with more ‘haze’ and a Nancy Sinatra with more sin.

‘The Last King of Rome’ is the pop song our (brief, all too mortal) century deserves. That King in the title could be Trump, it could have been Clinton, it could be the singer, it could be you—all of us tiny emperors in love with our false sense of power. Carta’s whole career has led to this moment. Like Electrelane, they began as an instrumental band, wrongly lumped in with post-rock, that evolved into something human and political and gloriously alive.

On Side Two, the woman disappears and the men are left to sing on their own, his partner gone. ‘Reasons To Be Fearful’ has a drum sound best described as terrifying. Each snare is a compressed hammer striking a skull inside a closet; the kick drum is a mugging that takes place in the stars. ‘Burn me when I’m dead,’ says the singer, ‘don’t leave my body to medical science,’ and the tone in Galvagna’s voice suggests he’ll haunt you for the rest of your days if you go against his wishes.

And then the girl reappears at the end, this time sounding like a ghost, far away & drenched in reverb, while Galvagna repeats the phrase ‘I’m never gonna fall in love again,’ a desolate Bacharach, and then it’s over. The Sand Collector’s Dream ends with the sound of a door being slammed repeatedly shut—the walls going up, goodbye to love, goodbye to the self, goodbye to mankind. Goodbye to all that, forever and ever. And good riddance.

You can imagine Carta perched on a hill watching the Bay Area—all its bridges & ephemeral wealth—-collapsing before them. They don’t panic. They aren’t in a rush. They’ve been expecting this. As Carta sing in their slow-burning stunner ‘Madeira,’ time is all they’ve got. Go make another pot of coffee. Call a few friends. This is the way the world ends—not with a bang, and not with a whimper, just beauty & regret.