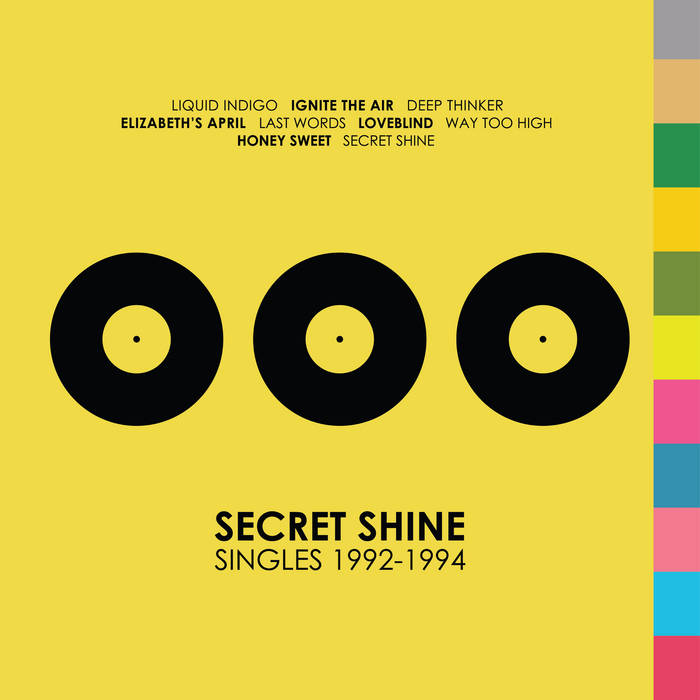 It’s here, compiled on vinyl for the first time. This is Secret Shine sequenced for maximum power. We get the Greater Than God EP in its entirety, and 25 years later the title sounds more modest than anything else—there’s a gift for melody here, a gift for speed and dynamics, that leaves nearly all their contemporaries in the dust. Then there’s the two singles, Ephemeral and Loveblind, complete with b-sides. All of it originally released on Sarah Records, the place where testosterone and rock cliches went to die. And if those cliches still exist today, the fault lies in the world for refusing to change.

Let us be direct: these songs are so beautiful; they evoke so much.

It’s always the people in between, the ones who straddle genres, that make the most exciting music. So even as Secret Shine—in their guitars, in their harmonies—echoed the sound we call shoegaze, the drift we call dreampop. they brought a level of pop smarts to their music, an emotional depth, that in the right moment (or the wrong moment—especially the wrong moment) can move me to tears.

You could call them the last great shoegaze band of the shoegaze era. One hears in these songs a final glorious breath right before Britpop arrives and money becomes more important than art, before digital life becomes ubiquitous, and our lives accelerate into fragments and chaos and oblivion, all of us feeling anonymous and yet always under constant surveillance.

Let us be direct: Secret Shine made music that was entirely human, expressive and unfiltered. Hearing it today, it sounds like freedom.

Genius is a lot of things, but mostly it’s just of good timing. And now that Time has, in a linear sense, ceased to exist at all, maybe Secret Shine can be allowed to exist without being defined by their musical influences. Let Secret Shine be simply Secret Shine—one of the most emotionally powerful bands of their era, or any era you want to put them in.